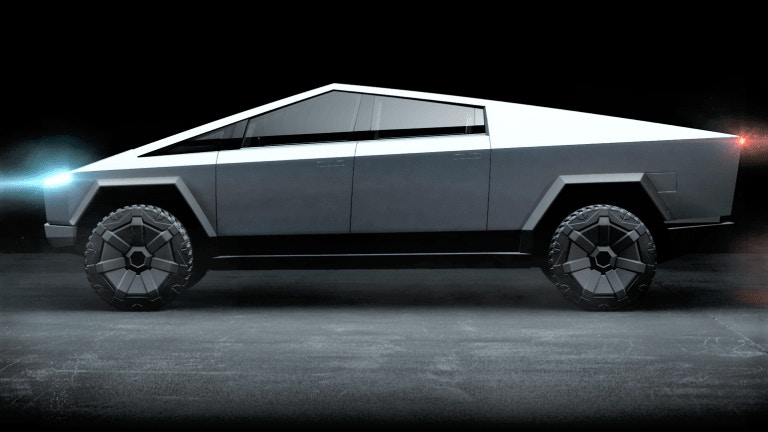 Tesla CEO Elon Musk has recently unveiled the first electric pickup truck, known as “Cybertruck”. The truck will come in three versions with 400kms, 480kms, and 800kms of driving range, and will start at US$39,900. The truck won’t be rolling off the assembly line until late 2021, but pre orders are now being accepted.

Always a showman, Musk put the truck through its paces in an effort to demonstrate its ruggedness. He had Franz von Holzhausen, Tesla’s chief of design, hit the door of the truck with a sledgehammer several times, claimed it was practically bulletproof, and showed the truck winning a tug-of-war with a Ford F150 and a drag race with a Porsche 911. However, when he tried to show how shatterproof the “armoured” glass was, things went awry. A metal ball thrown by von Holzhausen shattered both the truck’s windows. “We’ll fix it in post,” a sheepish Musk quipped.

There are three versions of the truck available:

The truck can seat a total of six adults, Tesla says. The body is made of ultra-hard 30X cold-rolled stainless steel. Musk had von Holzhausen demonstrate the body’s strength by smashing it with the aforementioned sledgehammer. The payload has a 1,500 kilos capacity, with 2.83 cubic metres of storage space. The truck’s vault length is 2 metres, and it will have 10cm suspension in either direction. A 42cm touchscreen sits in the centre of the dashboard, though images of the interior look slightly unfinished.

Musk has spent the better part of a decade toying with the idea of a Tesla pickup truck. He tweeted in 2012 that he “would love to make a Tesla supertruck” with “crazy torque” and “dynamic air suspension.” By 2013, he told Business Insider Magazine that the company was actually planning to make one. The pickup was even features in his second “master plan” for Tesla, which he published in 2016.

Musk continued to toy with the idea in public, saying in April 2017 that a reveal event would happen in “18 to 24 months.” In 2018 he said the truck had taken on a “futuristic-like cyberpunk, Blade Runner” design, and that he didn’t even care much if people didn’t like it. He’s since said the pickup truck is his favourite project out of all the ones Tesla’s working on.

While the pickup truck has obviously been a pet project for Musk, it could also be a great opportunity for Tesla’s business. Not only are pickup sales on the rise in the US, but trucks command high average selling prices and high profit margins.

“Pickup truck buyers spend a lot on their trucks,” says Tyson Jominy, vice president of data and analytics consulting at JD Power. “A US$50,000 pickup truck is a very common occurrence now. People are willing to spend on this segment to haul their toys, to support a lifestyle.”

Tesla has led the charge into long-range electric vehicles, and there’s currently no mass-market electric pickup truck available for sale. But the landscape will change by the time the truck ships. Ford has an all-electric F-150 on the way, General Motors confirmed it will put an electric pickup on the market in 2021, and EV startup Rivian — which is now backed by both Ford and Amazon — is scheduled to release its electric pickup in late 2020. Depending on how things shake out with all of these plans, Tesla could wind up releasing the Cybertruck into a market that’s already somewhat established — which would be an unfamiliar position for the company.

What Is The Future Of Petrol Stations?

The increase in use of electric cars will lead to a decline of inner-city petrol stations as drivers charge at home or work. ...

Vehicle manufacturers depend upon buyers falling in love with lustrous colours for those extra dollars....